In 2003 ,a. group of friends & fans supported me in the production of my debut CD of poetry & song " Soul Psalms-Birth, Death, Resurexion". It was a true labor of community love. I produced, conceived, wrote and performed all the work backed by an incredible group of musicians. We recorded the CD LIVE  in a studio in Boston, MA

Some of the poems here subsequently were published in my 2017 debut Book of Poetry with the same name "Soul Psalms" published by She Writes Press.

...."Prepare to be touched, angered, relaxed,

...."Prepare to be touched, angered, relaxed, challenged , soothed and renewed all at once...Truly ,this Cd is one of the best local productions by an individual artist..." Jamarhl Crawford- For Weekly Dig ( boston)2004

...." the sound and music brought me back way back to a Nina Simone like sound, poetry, verse and song all wrapped in one...the millenium generation is in for a surprise.." Anita Raynor, Roxbury, MA-Educator. 1/4/05

U-MELENI whose Ndebele/Zulu name means " What are we waiting for?" is a Zimbabwean Multi-dimensional Soul Artist who has been performing her poetry throughout the Boston area for several years. She has performed at numerous Venues some are: Afrocentrics, Lizard Lounge in Cambridge , Verbalization, Cantab Lounge, etc Clubs -Estelles, Slades, All Asia , Matt Murphys, Wallys's , Milky Way lounge in Jamaica Plain, MA, USA ) where she was also the Host for LIQUID FUSION .for several months in Nov 2000- June 2001 which sought to foster collaborate in Artists at open mic events. She has also graced the airwaves having been a repeated guest at WERS 88.9FM for April 2003 Live Music Week as well as other college radio stations. She has together with a group of talented female Artists raised funds and awareness for Domestic Violence and Girls /Women's programs at conferences and college circuits. In addition she has facilitated workshops on Wellness to youth in the Boston Public Schools for the past four years promoting positive healthy lifestyles and Artistic -Expression.

She has also OPENED and MODELLED two Annual Haitian Brothers Networking Nationwide (HBNN) Fashion Shows in 2000 and 2001. She has also lent her passion for words CO-WRITING the narration in the independent film " In My Mother's House" directed by Andrew Millington that was shown in the Roxbury Film Festival summer 2003 shown at Northeastern University, part of the Color of Film Series. In October 2003, U-MELENI SELF -RELEASED her debut CD "SOUL PSALMS-Birth, Death, Resurrexion" which is a semi-autobiographical journey into her soul through word power and vocal vibrations stemming from her love of all music and her Shona /Zulu Heritage.

HER CD IS AVAILABLE AT JAMAICAWAY BOOKS IN JP and SKIPPY WHITES ( Columbus ave-Egelston, JP) FOR $10!!! 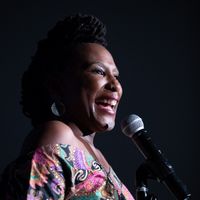 When Home Won't Let You Stay:Migration through Contemporary Art

The ICA partners with the International Institute of New England to present their Suitcase Stories program, featuring both foreign- and U.S.-born local residents sharing inspiring stories of refugee and immigrant life in conjunction with the exhibition When Home Won’t Let You Stay: Migration through Contemporary Art.   I am one of three storytellers sharing " Seeds, Soil & Water" my story that was aired on WGBH & World Channel LIVE  followed by a talk back about Suitcase Stories and the importance of amplifying immigrant and refugee voices. 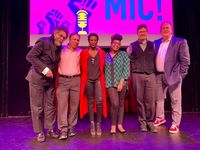 Resistance Mic! is part of the A.R.T. of Human Rights series, an ongoing collaboration between the American Repertory Theater and Harvard Kennedy School’s Carr Center for Human Rights Policy. The host is Timothy Patrick McCarthy.   I shared the stage with Dr Cornel West 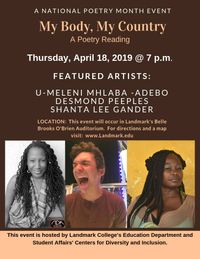 My Body, My Country

MY BODY, MY COUNTRY: A POETRY READINGFree Event. In every era, there are some bodies that are more policed or “owned” than others. This is what perhaps makes defining our internal and external geographies so challenging. We often undertake an exploratory journey attempting to separate our identity and sense of becoming from social, cultural, and other pressures. Often, these explorations shift throughout our lives. We ultimately are our own countries, and we carry our geography within us. What are the lines of distinction in terms of who has the freedom or choice of their body? How do we begin to explore the self as topography? My Body, My Country introduces the following artists who will be exploring these topics in a live performance of their written work. This is a National Poetry Month event sponsored and hosted by Landmark College’s Education Department, Student Affairs, and Centers for Diversity and Inclusion. ABOUT THE ARTISTS U-Meleni Mhlaba-Adebo is a Leominister, MA born Zimbabwean American grown poet, author, actress, singer and educator who has performed nationally and internationally in Zimbabwe, South Africa, Nigeria, Portugal and Ireland. She was featured on “WGBH Suitcase Stories.” Her poetry collection “Soul Psalms” (She Writes Press) was described by David Updike as “written in a fearless female voice tempered with optimism and healing possibilities of love.” Shanta Lee Gander is an artist and multi-faceted professional. As an artist, her endeavors include writing prose, poetry, investigative journalism, and photography. Her poetry, prose, and personal essays have been featured in Rebelle Society, on the Ms. Magazine Blog, The Commons weekly newspaper. Shanta Lee is the co-author of ‘Ghosts of Cuba: An Interracial Couple’s Exploration of Cuba in the Age of Trump—Told in Images & Words’ (Green Writers Press, September 2019). Desmond Peeples’ fiction, poetry, and nonfiction have appeared in Five [Quarterly], Big Bridge, Goreyesque, Hunger Mountain, and elsewhere, and their original music is released independently. They were the founding editor of the literary arts magazine, Mount Island, and currently consult for Green Writers Press. *Details about location at Landmark College: This event will be located in the East Academic Building in the auditorium (marked EAB-Auditorium). For directions and a map of the Landmark College campus, please visit: https://www.landmark.edu/about/directions-to-campus